The City of Osmio was founded on the morning of March 7, 2005

On that day, a scheduled meeting at the headquarters of the International Telecommunication Union in Geneva had been convened to discuss a particular response to the many problems afflicting the world's information infrastructure.

At the gathering, whose official name was the Quiet Enjoyment Infrastructure Meeting, representatives of the ITU, the International Union of the Latin Notariat (www.uinl.org) and The Authenticity Alliance set out to address the world's need for a public key infrastructure as conceived in the ITU/BDU's World e-Trust Initiative of 2002. While the Initiative had been intended as a means for developing nations to overcome the lack of commercial infrastructure, the QEI meeting was convened specifically out of recognition that the whole world, developed as well as developing, needed such a public key infrastructure.

Why the ITU? Why the Quiet Enjoyment Infrastructure?

Organizations are discovering that established PKI technology can be a key to eliminating the anonymity-borne fraud and malware that have become such a threat to the world's information infrastructure.

But the ITU's charter calls for governance strictly by consensus of its member states, which vary widely in their policies regarding the privacy and freedom of their citizens. For those and other reasons, it became clear that the City of Osmio needed to be governed in a different way. The City of Osmio is now independent of the International Telecommunication Union.

The City of Osmio exists to ensure the privacy and security of its residents, and of residents of online communities for which Osmio serves as administrative capital. Its governance, and for that matter its ownership, is directed by and of those residents, using a form of government called optimocracy. 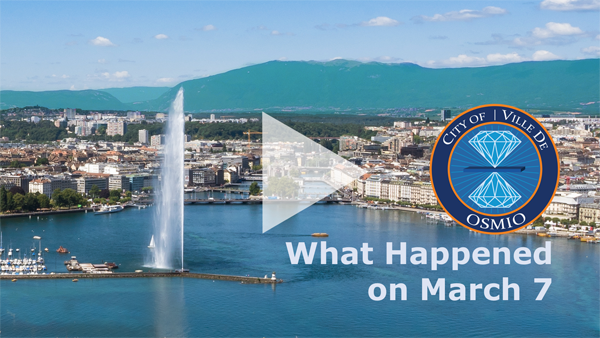 What Happened on March 7